Ionic Framework is the free, open source mobile UI toolkit for developing high-quality cross-platform apps for native iOS, Android, and the web—all from a single codebase. 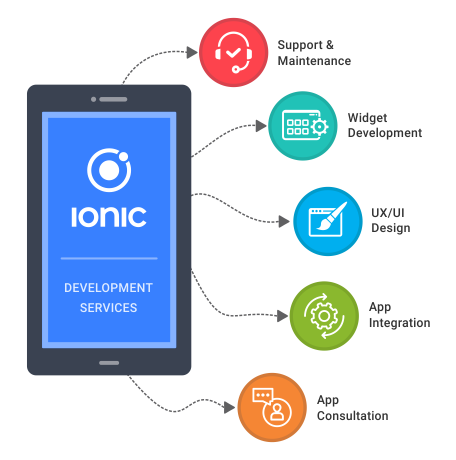 What is Ionic, and where does it fit?

Ionic is an HTML5 Mobile App Development framework targeted at building hybrid mobile apps. Hybrid apps are essentially small websites running in a browser shell in an app that have access to the native platform layer. Hybrid apps have many benefits over pure native apps, specifically in terms of platform support, speed of development, and access to 3rd party code.The bulk of an Ionic app will be written in HTML, Javascript, and CSS.

Why did we build Ionic?

We built Ionic because we strongly believed that HTML5 would rule on mobile over time, exactly as it has on the desktop. Once desktop computers became powerful enough and browser technology had advanced enough, almost everyone was spending their computing time in the browser. And developers were overwhelmingly building web applications. With recent advancements in mobile technology, smartphones and tablets are now capable of running many of those same web applications.

With Ionic, we wanted to build an HTML5 mobile development framework that was focused on native or hybrid apps instead of mobile websites, since we felt there were great tools already for mobile website development. So Ionic apps aren’t meant to be run in a mobile browser app like Chrome or Safari, but rather the low-level browser shell like iOS’s UIWebView or Android’s WebView, which are wrapped by tools like Cordova/PhoneGap.

Those familiar with web development will find the structure of an Ionic app straightforward. At its core, it’s just a web page running in an native app shell! That means we can use any kind of HTML, CSS, and Javascript we want. The only difference is, instead of creating a website that others will link to, we are building a self-contained application experience.

The bulk of an Ionic app will be written in HTML, Javascript, and CSS. Eager developers might also dig down into the native layer with custom Cordova plugins or native code, but it’s not necessary to get a great app.

Ionic also uses AngularJS for a lot of the core functionality of the framework. While you can still use Ionic with just the CSS portion, we recommend investing in Angular as it’s one of the best ways to build browser-based applications today.

We want to be a global leader delivering enterprise business management products and solutions.

In today’s competitive mobile market, app development is playing an increasingly significant role. There is no sign of slowing in the growth of mobile apps too. So, if you have an app idea and want to get it developed soon, you will have to determine your app development requirements in the first place.

Our developers are well aware of the latest technologies. We encourage our developers to attend conferences and training to stay updated with the technology.

Working in an agile environment, Communication plays an important role especially in development. Our team sends regular updates and reports on the progress of the project.

Our Developers possess the best skill set and work as per your project requirements and with convenient work pattern to deliver top-notch and remarkable websites and app. Your project and data are highly secured.

Our proficient and tech-savvy developers have ample experience in development providing solutions that customers to turn into high performance business units.

You don’t have to worry about the resources required for the app development. As the developer hired by you will have all the necessary resources for the development which would be provided by our company.

We provide cost effective Solutions and application in your budget helping in reducing cost and high yield.

Send us your requirement

Thank you for reaching out, Let's Talk